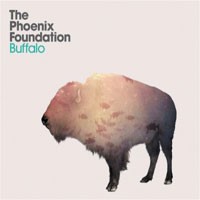 “The future, and the past, seldom sounded so delightful” - Q.

Martin says: While most bands are supernovae, all explosive energy and creativity expended in one brilliant moment before quickly fading, there is another rarer form that reaches maturity more slowly, honing and developing its craft and tending to have a much longer productive life. Auckland’s Phoenix Foundation have taken 10 years to realise the sublime, effortless meander of “Buffalo”, and it’s quickly apparent from the album’s opener, “Eventually” that it’s been well worth the wait. Its drifting, captivating languor sets the scene for the rest of the LP, which manages that difficult balance of being entirely good natured without being trivial and laid back without being soporific. Their engaging psychedelic pop is easily carried by vocal harmonies and hooks that stick, earworms that caress rather than annoy. If you haven’t been reeled in by the gentle glow of “Golden Ship”, which closes the album, then you probably never will be and, frankly, there’s probably something wrong with you.