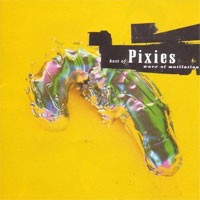 The ultimate Pixies compilation, ‘Wave Of Mutilation’ has sold over half a million copies since its release in 2004 and remains a consistent seller with the band regularly touring, headlining festivals and crossing over to new audiences. However, it has taken six years and the re-issue of the regular albums to finally release the ‘Best Of Pixies’ on vinyl.

Following the original CD sequencing, the double vinyl set (each side is under 20 minutes long for the best quality cut) is packaged in a gatefold sleeve.

“This compilation's track listing is in more or less chronological order… which helps the flow of the collection; since each of the Pixies’ albums had its own distinctive feel, the cut'n'paste approach of the previous best of didn't always serve the songs it collected. The collection does a good job of compiling the band's singles, two excellent B-sides (‘Into The White’ and ‘Winterlong’), and many of their key album tracks. Even though the best way to experience the band is still devouring each of their albums, ‘Wave Of Mutilation: Best Of Pixies’ is intended as a primer to their work, and - fannish nitpicking aside - it's a far better overview than what was available before” - Heather Phares (All Music).

Andy says: The best of one of the greatest bands ever, now on lush double vinyl. RESULT.