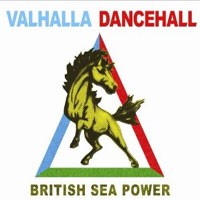 "Valhalla Dancehall" is the band’s fourth album proper, following the Mercury-nominated "Do You Like Rock Music?" in 2008 and the "Man Of Aran" soundtrack in 2009. With its title, "Valhalla Dancehall" invokes a wild-eyed internationalism, alluding to both the Norse mythos and Jamaican discos – to the Viking heaven and Caribbean good times. BSP are maybe unlikely to be taking up residence in downtown Kingston, but the album title and the music it comes with are antidotes to limited horizons and parochial mindsets. BSP have recently played live inside the Arctic Circle and atop the Great Wall Of China. With its ambition and sense of wonder, the new album mirrors such globe-girdling scope.

'We almost called the album Return Of The Gender Benders', says BSP frontman Yan. 'It was a fun title, but it also had a more serious side. The music we were recording made us want to link ourselves with people who aren’t afraid to stand out. Another working title was The Interstellar Sussex Downs – a mix of the near and the far. It’s our most ambitious record yet and there’s a bit of a party theme – the word 'party' features a few times. Lee Perry and Odin are both there, in Valhalla where the bar stays open for eternity. Four albums in and we're finally learning to enjoy ourselves..'