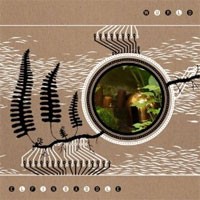 Elfin Saddle began working with Constellation in late 2008. At the same time, the band's co-founders, Emi Honda and Jordan McKenzie, were also completing a year-long art project involving sculpture, stop-motion animation and time-lapse video. Using the backyard of their Montreal apartment as an installation site, Emi and Jordan evolved and devolved an entire miniature world, conjuring an historical arc of civilization from early settlement and relative harmony with nature to gradual industrialisation, mechanisation and the inevitable discontents of over-production, waste and decline.

The resulting work is a wondrous, unpretentious, gently mystical 23-minute video piece entitled "Wurld", for which they also composed the soundtrack. "Wurld" premiered at the Vienna International Film Festival in November 2009 and received a Canadian premiere at the Musee d'art contemporain de Montreal (MACM) in May 2010.

Elfin Saddle's "Wurld" is available in two formats, each using 100% recycled papers and boards:
Custom DVD package is a screen-printed 25 pt. chipboard gatefold jacket with front cover die-cut window, containing a series of four full-colour 5"x7" postcards featuring stills from the "Wurld" film (each of which can be positioned to shine through the window cut) and a 7"x14" duotone art print. Limited to 1000 for the world.
10" vinyl package is similarly screen-printed and die-cut on the same thick board, with a 10"x10" full colour insert card, the 5"x7" postcard set, and a larger 10"x20" duotone art print poster. The 10" package includes the DVD in a printed sleeve, inserted in the vinyl jacket. Limited to 500 for the world.

"Wurld" represents a new convergence in the art and music practice of Emi and Jordan, who also produced beautiful new drawings and collages for the package design and insert poster. Constellation is very proud to be presenting a truly multi-media work by these unique and talented artists.