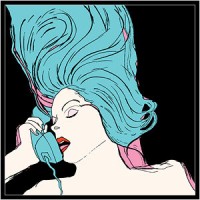 With a West Coast tour looming and problems with the recording (burnt singers, overheated tape reels, the final mix getting lost in the post etc), Chromatics' Johnny Jewel decided to run off a few demo CDs of "Night Drive" to sell at the band's shows anyway. However, as soon as the press and bloggers got hold of copies, the album became in overnight sensation. In need of money to get Italians Do It Better going (this was 2007 remember), and with big demand for copies, Jewel decided to release this demo version as a full album... Which is how it remained - until now! When that lost final mix finally turned up 18 months later (!), it was decided to remaster the whole production, add the tracks missed off the original demo CD copies and press up some vinyl too.

The record opens at the end of a long night with our heroine making a phone call to her lover. In the background through the muffled walls of a sweaty nightclub you can hear music playing. She drives to the coast to clear her head, with "Night Drive" on the car stereo. As the hi-hat attacks your speakers, her hair blows in the breeze. This is the opening of the record that continues to define Chromatics' unique sound. The music is drenched in reverb echoeing the death of hope and the price of nostalgia. The most powerful example of this is Chromatics daring take on the Kate Bush classic, "Running Up That Hill," a favorite amongst fans and critics alike. With ethereal songs like "Tomorrow Is So Far Away", "Tick Of The Clock", & "Let's Make This A Moment To Remember", they give the listener the space to breathe. We get a glimpse of their chequered past with the post punk sheen of Joy Division on "Healer".

The lost side of the album is dark and abstract. Opening with the almost funerial "Shining Violence". Where detuned analog synths collide and struggle to hang onto a fading melody. Followed by the sleeper hit, "Circled Sun", and the Vangelis-inspired reflection of life's duality in "The Gemini". "Night Drive" closes with an arpeggiated musical refrain from the beginning of side one. "Acelerator" reinterprates elements of the chord progression from "Night Drive" while leaning heavily on the gear shift. As painted lines in the road begin to strobe, Chromatics propels full speed ahead into an uncertain future.