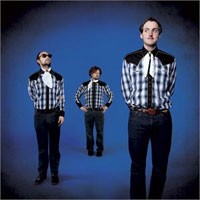 Drakkar Sauna have released five full length records. Beginning with the Fugs-inspired "Diptych Rover" (2004) and "Drakkansasauna" (2005), to their most recent: the astronaut And alchemy concept album "20009" (2009) they have developed a musical abandon and lyrical facility admired in the oddest corners of our polyhedron.

Songwriter Wallace Cochran is the author of the novel The Moon For Its Citizens (2009) and the director of the picture The Blood Feud (2003) in which multi-instrumentalist Jeff Stolz had a featured role and composed much of the score. For their Blue 45 Drakkar Sauna perform the original compositions "Leave That Hole Alone" which questions the existence of anything beyond the self, even the suffering of saints; and "Brundlefly, My Chariot" which drinks deep, so as to taste of the plasma spring. They are joined on this recording by frequent collaborator Jason Groth of the Bloomington, IN bands The Coke Dares and Magnolia Electric Co. Cochran and Stolz live and work in Lawrence, KS.