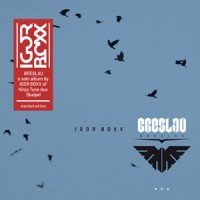 Igor Boxx known also as Igor Pudlo (from Ninja Tune's Polish act Skalpel) is opening a new decade with his first solo album, "Breslau". For Igor's solo debut album, the inspiration comes like before from his home country and his home town.

"Breslau" tells a tale of 1945 siege of Festung Breslau undertaken by the Red Army. This journey is musically so emotional and powerful that it allows anyone to follow the story behind the track. Sounds are used to depict the massive force and fury of bolsheviks' attack and the determination of the terrorized civil population of the city to hold on. Krautrock grinding illustrates the monotony of the endless battle, psychodelic ornaments underline the absurd of wartime madness, jazz rhythms sound off the chaos on both sides of the conflict whilst ambient timelessness paints the overwhelming desperation of city defenders' efforts. The live version is more dynamic than the studio version describing the atmosphere of the last group of terrified citizens of Breslau whose dramatic faith is drummed out by Stalin's organs. The dance macabre in the ruins of burning, doomed city will be explosive.