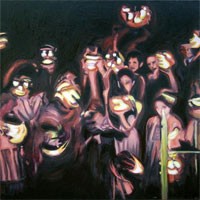 Second album of amazing pop from Sore Eros, a split label release, limited vinyl pressing on SHDWPLY, and CD pressing on Agitated; With "Know Touching", Sore Eros have crafted a record that is simultaneously dense and soothingly melodic, fulfilling the considerable promise of their debut, 2009’s "Second Chants". For this record, the band (Robert Robinson and Adam Langellotti) made a conscious departure from its debut, recording the album direct to a ½ inch 8 track reel-to-reel without the aid of computers. From this the band emerged with a record that blooms with melody and innocent joy that bring to mind such similarly spaced out artists as Atlas Sound and Kurt Vile. When patched together, this detailed attention to arrangement and dreamy melodic sensibilities combine to make "Know Touching" an effortlessly beautiful record.

'People said a lot of the songs [on Second Chants] sounded like I was singing from a room down the hall, this time we wanted it to sound like I was whispering in your ear. This began to give the record a little bit of a creepy feel, however Adam's arrangements on the record countered that creepiness with more of a playful and innocent feel'. - Robert.