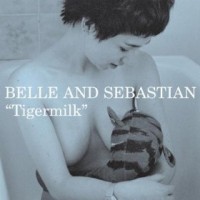 Originally released in an edition of 1,000 vinyl LPs as part of a college music business course, Belle & Sebastian's 1996 debut "Tigermilk" rapidly became a highly sought-after collector's item. Reissued in 1999 to combat a flood of expensive bootlegs, the album shows that the band's later acclaim was not unfounded.

Nine of the 10 tracks feature main songwriter Stuart Murdoch's winsome vocals, a mix of acoustic andelectric instrumentation and a grab-bag of pianos, horns, flutes, and hand claps. The odd one out of the bunch is "Electronic Renaissance", an electronic keyboard knockabout that recalls Depeche Mode's more insistent moments from the Vince Clarke era. Standouts among the other tracks are "Expectations", the tale of a square peg at school who is 'known for being strange/Making life-size models of the Velvet Underground in clay', the lyrically wistful but musically charged "She's Losing It", and "I Don't Love Anyone", which references Felt, a band Belle & Sebastian cites among its influences.

Belle And SebastianGirls In Peacetime Want To Dance