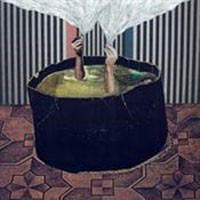 ‘No man is an island’ wrote John Donne, but what about bands? Well, they’re probably not islands either, but like most things in life, you need exceptions to prove the rule. That’s why it was so remarkable when The Phantom Band, with their legion of musical references, still managed to sound quite unlike anyone else when they released "Checkmate Savage" in 2009, a debut that earned mass critical applause and made them the cult success of the year. Twelve months later, they’re still in a movement of one, and their follow-up, "The Wants", looks set to cement their reputation as one of the most inventive and vital units at work today.

If "Checkmate Savage" was the product of a band mulling over the human race’s inexorable slide into oblivion, then its follow-up found them turning feral and heading for the hills to ride out the storm. Holing up in Chem19 (Chemikal Underground’s studio in the wastelands of Blantyre), The Phantom Band immersed themselves in a primordial soup of influences before emerging six months later, emaciated and squinting in the pallid sunlight, cradling "The Wants": a nine-track musical folly and the soundtrack to their own personal apocalypse.

Charged with creating a second album more or less from scratch and in situ - an album upon which their creative and material survival depended - they contracted a virulent strain of cabin fever and promptly set sail into the mouth of madness. Keyboardist Andy Wake elaborates: 'As you know, The Phantom Band was built on the site of an ancient Indian burial ground, so every time we record it's like an emotional exorcism. It's painful, prolonged, confusing; at times it's hard to tell what's happening outside of this other-world'. Guiding them through this tortuous birthing process was the chimerical figure of Mungo Bang, 'a spiritual adviser of sorts who came highly recommended. He also added vibes'.

Their madness had method, because a lot came out in the mix: a forest of tuned percussion, poly-rhythmic group vocals, fuzz guitars and medieval electronics. Musical inspirations included David Lynch and John Carpenter soundtracks, German kosmische music of the 70’s, Tom Waits, digidub rhythms, R&B harmonies, doo-wop and rock'n'roll. Lyrical inspiration emerged from lycanthropy, vampires, doppelgangers and the Salem witch trials. That’s also Teenage Fanclub’s Wurlitzer organ you can hear on "Everybody Knows It’s True", alongside a host of other instruments, both homemade and hard-bought. Various bits of furniture, wood, a toy drum machine, some home-made drum triggers and FX pedals (aptly named the Phantosizer), shelvaphones, a dulcimer and the studio fire extinguisher - all had roles to play on the final recording. 'Sink [Greg Sinclair] appeared at rehearsal one day with what looked like a body bag containing at least one corpse. It turned out to be a full size vibrophone with all the trimmings', explains Wake. If any more evidence of creative initiative was required, the album opens with the sound of a baliphone being sawed into tune in preparation for a take.

The end product represents a major leap forward for the band, a sound more of their own. Juxtapositions are more apparent – arcane folk melodies and gothic lyrical imagery straddle vintage analogue synths and primitive drum machines. 'Where Checkmate Savage was varied, we've intensified those elements, because we've got no reason to be subtle with them', says Wake. 'It's much more concentrated, more skilfully executed and with more decoration. It’s "Checkmate Savage" - On Ice'.

The Phantom Band was pulled together from all four corners of Scotland, settling on Glasgow as PB HQ. Duncan Marquiss (guitar), Gerry Hart (bass), Andy Wake (keyboards), Rick Anthony (vocals) and Greg Sinclair (guitars) are a volatile cabal of creative contradictions: a disorientating amalgam of music, art and performance that defies categorisation and provides an object lesson in how to forge something distinct and unique from well-worn sources. "Checkmate Savage" won plaudits from the mainstream music press and the indie blogs alike, finding famous fans in Peter Buck and comic artist Frank Quitely, while the influential music emporium Piccadilly Records named it their album of the year. Their new album may be "The Wants", but what do The Phantom Band want for? 'Survival. For this album to lead to another after it, that's all. We think it's better than the last one, and if anyone agrees with us then brilliant, they can hop aboard. Those who disagree can hop aboard too, but they're sailing at the stern'.

Laura says: The mighty Phantom Band return with a superb follow up to their debut album, which was our Album Of The Year in 2009. "The Wants" picks up where "Checkmate Savage" left off adding more and more layers to their already complex sound. It's less motorik than their debut, but still with their distinctive pulsing rhythms at the heart of it. There's more analogue synth action and knob twiddling going on this time around and on each listen, you're plunged deeper into their world.
The first band to get a Piccadillly Album Of The Year in consecutive years? The competition is pretty stiff this year, but it's definitely in the running.....