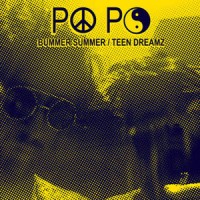 Shoaib and Zeb of Po Po zero in on a sound that combines live instrumentation with electronic programming cranked out on an old tower PC. This single gives a perfect look into the crosshairs of that Po Po world with two very different tracks. "Bummer Summer" is a no brainer of radical weirdness, one of Po Po’s poppiest and prettiest tracks, despite the title and lyrics that may or may not say 'I’ll watch you die.' It’s one of those feel good feeling bad songs that sounds best soaked in 97 degree humidity… Or looking at the sky from a prone position on the roof of a car… Or zoning the hell out somewhere for no good reason. And what’s more, it sounds like a lost demo gem from The Jesus And Mary Chain’s "Darklands" / "Automatic" period. The intro to "Teen Dreamz" on the flip sounds like a duet between the Hammer of Thor in Hell and a 5000 watt call-to-prayer minaret speaker that’s been screwed down to negative speed. It was called “Epic Intro Song” for a while for a reason; stick around for the drop. After a minute, the uniquely heavy "Teen Dreamz" falls into a mind numbing half time beat while Zeb’s falsetto vocals roll around with the drones from the intro, and the whole thing makes you feel like you just ate a pound of mushrooms while listening to The Stranglers’ "Meninblack" album. This might not even be a 'dance' record, but you’ll just have to work that out for yourself.