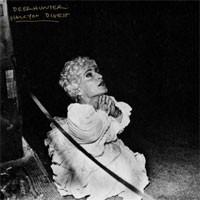 "Halcyon Digest" is the fourth studio album from Atlanta’s Deerhunter, released by 4AD.

The quartet of Bradford Cox, Lockett Pundt, Joshua Fauver and Moses Archuleta have established themselves as one of the most innovative and important bands to emerge from the US in recent years and "Halcyon Digest" is sure to bolster this newfound status of theirs.

Deerhunter are renowned for their prolificacy; in the two years since signing to 4AD, the group has released a double album ("Microcastle" and "Weird Era Cont.") and a five-track EP ("Rainwater Cassette Exchange") as well as numerous unofficial tracks that appear on a regular basis – albeit only for a short duration – on the band’s blog. Furthermore, the band’s own solo projects (Bradford’s Atlas Sound moniker and Lockett’s Lotus Plaza) have released albums at a similar rate.

With every release, Deerhunter widen their sphere of influence and critically they continue to impress.