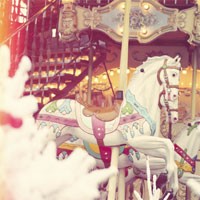 Killer debut album from Altar Eagle, possibly the poppiest release on the Type label to date.

Highly Recommended to fans of Cold Cave, Slowdive and My Bloody Valentine.

Brad Rose (aka The North Sea) is probably the last person you’d expect to see at the helm of a pop album. A folk record - maybe, a noise record – sure, but pop? Probably not. Yet that's exactly what he and his wife Eden Hemming have done with "Mechanical Gardens". The Altar Eagle sound might not come as much of a shock for those cassette collectors who have managed to source copies of the duo's now rare debut EPs, but for the rest of the world it should serve as a radical change in direction for one of experimental music's most valuable sons.

The ear-splitting noise that enticed listeners on "Bloodlines" is all but forgotten as Brad and Eden pick through shimmering dream-pop and cold-wave electronics with the greatest of ease. The quality is assured within minutes of the gorgeous Slowdive-esque opener "Battlegrounds". Anchored by Eden's humming, ethereal vocal tones, the song is a glorious statement of intent and while the band go into clubbier directions on the second half, this song is a gateway to their sound.

Possibly the biggest surprise on "Mechanical Gardens" is the sound shift which occurs mid-way through the record, as the bubbling bliss of "B'Nai B'Rith Girls" gives way to the abrasive electro growl of "Monsters". Influenced in part by Eden’s long-time love affair with techno and Brad’s recent obsession with synthesizers, the duo strike a perfect middle ground between crumbling experimentation and pop excess. This is rarely better explored than on "Spy Movie", a track that somehow combines the supposedly warring sounds of Juan Atkins and early My Bloody Valentine.

On "Mechanical Gardens" Brad and Eden have created an album that revels in its grab-bag of influences, but somehow they have managed to emerge with a sound that is totally singular. It’s pop music for sure, but un-cynical, atypical and hugely enjoyable.