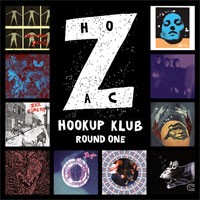 It's finally here, all on one handy format for accessing the hottest cuts from the first Round of the HoZac singles club, along with two previously unreleased bonus tracks by Teepee and Idle Times. This compilation spans the first ten elusive subscription-only 7" records released from 2009-2010, featuring rare tracks by Dum Dum Girls, Woven Bones, Box Elders, Flight, White Mystery, Teepee, Idle Times, Mother Of Tears, Art Thieves, and Teeth (the elusive Blank Dogs/Spider side project), and is not to be missed.

Not only does this release mark the 50th record in the Hozac repertoire, but its got the goods to back it up with a massive array of underground gems normally fetching hefty ebay prices as the only other means of access. Although not every track from the 7" series is included due to space limitations, they've culled the most sparkling cuts and remastered the tracks to perfection, and housed it in one convenient package. Oh, and those bonus tracks? You can bet you're gonna want 'em based on the brilliance of Teepee and Idle Times' exquisite track records.

The FlipsI Just Dont Know Where I Stand

Woven BonesIn And Out And Back Again

Francis Harold & The HologramsMirror Of Fear

Wizzard SleeveMake The World Go Away

The People's TempleMake You Understand