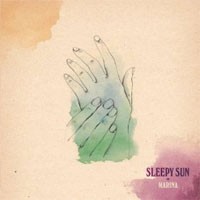 '...stunning opener "Marina", a mix of twin guitar fuzz, ghostly folk melody and bravura Afro-Latin breakdown' - Uncut
'Although the album is full of brilliance, "Marina" stands headstrong above the others in terms of scope an grandeur' – Clash
''Marina' could be Hendrix tuning up for the star spangled banner before Rachel Fannan asks it to be floated down west of the lazy river in sweet and sexy folk tones.' - Subbacultcha.

"Marina" is the first single to be taken from Sleepy Sun's critically acclaimed album "Fever" released in May this year. (4/5 Mojo, 4/5 Uncut, 9/10 Clash). Sleepy Sun is a California band from many Californias. They hail from the rolling oak and sage hills of Sierra Gold Country, The San Francisco Peninsula, where Kesey raged and the Dead were once Warlocks, and the forever-sunshine climes of the Southland. They came together—young and garage strutting in the coastal Northern California crucible of Santa Cruz. And there they birthed the Sleepy sound—dead blues shaken alive, razor sharp and ramblin’, soul, sonic science and dead-on pop surgery. Wooden, earthy, stratospheric, and swinging…California music of beautiful contrasts for conflicted times.

A band working, and a working band—Sleepy Sun’s soaring and soul-stirring live shows are already mowing down audiences on both sides of the Atlantic. They’ve opened for Autolux and Mudhoney, rocked Primavera and Treasure Island, and relentlessly toured the capitals and humble hamlets of North America and Europe. And in their path, the converts are fast becoming legion.