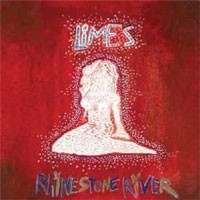 Memphis is home to several of rock’s most endearingly off-kilter rock storytellers, from Jim Dickinson to Jeffrey Evans to Ross Johnson. To that list, one can now add Shawn Cripps, leader of The Limes. On the band’s debut full-length, "Rhinestone River", Cripps retains the musical talents of Harlan T. Bobo, who previously helped on The Limes’ Rock ’n’ Roll Heart single. Bobo’s hypnotic keyboards perfectly complement Cripps’s gritty guitar work and vocals, particularly on “Sounds Like A Shimmy”.

"Rhinestone River" also features contributions by Memphis scene stalwarts Ross Johnson, Paul Buchignani (Afghan Whigs, Bobo’s backing band), Alicja Trout (Lost Sounds, River City Tanlines) and Bruce Saltmarsh (’68 Comeback, Porch Ghouls). The title track, with its wobbly gait and lyrics like 'Sitting on this barstool, sweating the rhinestone river', can induce secondhand drunkenness in anyone within earshot. “Rhinestone River” is the closest an American band has gotten to the pickled poetry of the Country Teasers. The momentum and melody of “Bottom of the Hole” unfurl like the narrative thrust of a bourbon-soaked anecdote at two in the morning. The album’s crown jewel is the closing track, “Last Year”. Cater-cornered rock guitars and Cripps’s talkin’ vocal style build up to a woozy climax that culminates in a feral 'woohoo'. Like the other great songs on "Rhinestone River", it threatens to fall apart several times but Cripps, with a little help from his friends and his engaging personality, holds it all together.