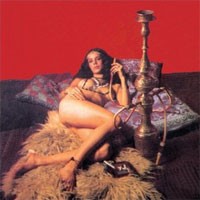 “Relaxing With…” is the first Heads album, its reissue, remastered and boosted with extras has been a long time coming: Rooster is mightily proud to announce its release at last.

The Heads had self-released a couple of 7”’, and then Cargo Uk’s inhouse label Headhunter UK got to release a further 7”, and then the Debut album in 1996. Amidst a world suffocating in Britpop smarm, the Heads cut a timely swathe with their unkempt rock psychedelique. The album contained 10 tracks of guitar driven, amp destroying rock, with cues taken straight from the US underground, Stooges, MC5, Mudhoney, Pussy Galore, early Monster Magnet too but with a distinctly British stamp, some of the drone and fuzz from Loop / Spacemen 3, some of the attitude of the Fall, Pink Fairies and Walking Seeds and overlaid with the spaced rock of early Hawkwind. It was obvious that the four members of the Heads were music obsessives.

The debut album was recorded at Foel studios (owned by Dave Anderson from Hawkwind) and engineered by Corin Dingley, it was mastered by John Dent at LOUD. For this reissue, the album has been kept on disc one in its entirety, and remastered by Shawn Joseph (he mastered their second album) and Simon Price, with the 'bonus' disc featuring unreleased tracks (including Spliff Riff from 1991) , all the early singles tracks, a selection of their Radcliffe / Radio One Rock Show session tracks, and their first John Peel session in its entirety. The artwork has been re-tooled and expanded excessively and obsessively by longtime art collaborator Johnny O with Simon Price to collate an appreciation of the Heads penned by a former tour manager, and dozens of fliers, unseen photos, clippings etc.

A 27 track 2CD release / 10 track vinyl release that confirms the Heads status as 'a national treasure'. Released on the band's own Rooster imprint, and with all material available digitally for the first time.

Fans of modern day psychedelic purveyors like Moon Duo, Wooden Shjips, La Otracina, Birds of Maya, Magic Lantern, and the likes should give this a listen.

The HeadsDead In The Water