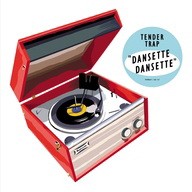 Tender Trap are now a proper girl-group! In contrast with earlier Tender Trap, which had a more electronic bent, the newly revitalized 'Trap has stronger links to the pop lineage of its founder members; Amelia Fletcher and Rob Pursey were in influential indiepop originals and John Peel favourites Talulah Gosh and Heavenly, who released records on such indiepop labels as Sarah Records, K and Stephen Pastel’s 53rd and 3rd. Neither Talulah Gosh nor Heavenly (Amelia's previous bands) had this much vocal harmony going on. With two extra girl voices (from new guitarist Elizabeth Morris of Allo Darlin' and new drummer Katrina Dixon) the band now combines the harmonies, oohs, ahs and sha-la-las of classic girl-pop with the stripped down beats and dirty guitars of the Shop Assistants and The Vaselines.

Following their albums "Film Molecules" and "6 Billion People", Fortuna Pop! bring us "Dansette Dansette", the band's excellent third album. Bristling with crunchy guitars and effortlessly catchy tunes, "Dansette Dansette" is ample proof of why Amelia and Rob's bands have been such a huge influence on today's generation of pop bands. Revered by today's revitalized indie-pop scene, their records are floor-fillers at indie dance clubs and their influence can be heard in bands such as Los Campesinos! (who namecheck Fletcher in their song "International Tweexcore Underground"), The Pains of Being Pure at Heart and Dum Dum Girls (who asked Tender Trap to support them at a recent London gig). Even US rockers The Hold Steady reference Heavenly in the title track of their new album Heaven is Whenever.

"Dansette Dansette" kicks of the record in fine fashion, morse feedback bleeps leading into a melodic ode to the bedroom record player. Being the first single from the album, "Do You Want A Boyfriend?" is a perfect chunk of pop, but it's not as innocent as it seems - it celebrates the girl-pop phenomenon, but deconstructs it too. "Girls With Guns" and "2 To The N" are more punk-inspired, hearkening back to Amelia's Talulah Gosh roots. Slower tunes like "Suddenly" and "Counting The Hours" give plenty of room for Amelia's vocal interplay with Elizabeth and Katrina, and "Capital L" wraps up the album in epic fashion, a tambourine-driven slow-dance which builds to a glorious crescendo.

Tender TrapDo You Want A Boyfriend?

Allo Darlin'Dreaming / You Still Send Me