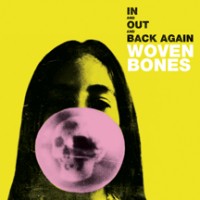 The raw exuberance that Woven Bones seethes from its tightly-wound inner coil of turmoil isn’t exactly the stuff daydreams are made of, but as their menacing presence has been culminating over the past couple of years, it’s now clear as daylight that their finest efforts would come together on this, their debut LP. As they’ve effectively dragged the shards of their tattered souls with building ferocity on each of their previous singles and EPs, the evolutional process has honed itself to a fine edge, poised to level any contention and break into the blinding realness of now. They’ve finally harnessed the elusive throb and crash of their intended sonic perfection on their own terms, and this debut album will no doubt convert the middling masses into drooling slaves to their hypnotic heartbeat rhythm.

What was only hinted at before is now as pure, raw, and ugly as a newborn jackal, squirming out of the wretched womb and ready to face the world, all the while, sending an evil chill down the spine and reminding you that yes, new music really can be this good. Like the eardrum-shattering noise pop icons that came before them, Woven Bones blaze their own trail of lascivious loudness and controlled snarl that’s just what the world needs right now, and the perfect soundtrack to your screwed-up summer.

The debut album, "In And Out And Back Again" delivers nine heart-stabbing hits that just keep hitting back, so without further hesitation, we give you the debut album that explodes heads on contact, by your new favourite band, Woven Bones. They slayed SXSW2010, and the album will be the proof that once again, America has the hits!