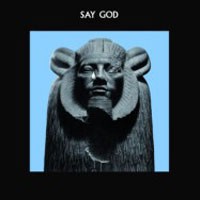 Daniel Higgs is a musician and artist from Baltimore, Maryland on whose behalf superlatives are destined to fail. It’s not that his artistic output – spanning three decades, numerous albums, books of poetry and collections of drawings – simply eludes classification, it defies it. Often we hear that a true work of art is meant to speak for itself, and with the work of Daniel Higgs the maxim rings truer than ever. Daniel is best known for his work as the lyricist and frontman of Lungfish, whose work on Dischord Records has spanned 3 decades. In addition to his work with Thrill Jockey, Daniel has released solo work on Holy Mountain, Northern Liberties, Open Mouth and Ideal Recordings. "Say God" is an album of gospel songs and poems, recorded with the help and enthusiasm of David Andrew Sitek (TV On The Radio).

Disc 1:
Hoofprints On The Ceiling Of Your Mind
Song For Azariah
Say God
A Message From The Beautiful

Disc 2:
Root & Bough
Jewel Of The East
Tumble Down
Christ Among Us