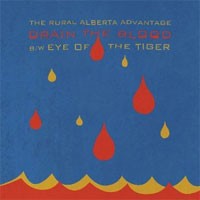 “Drain the Blood” is the first single from the band’s album “Hometowns” and includes the B-side cover of “Eye of the Tiger”. The Rural Alberta Advantage was born out of singer/songwriter Nils Edenloff’s exodus from the province that inspired the band’s name and many of the songs from their enthralling debut album, “Hometowns”. To cope with the homesickness and isolation of his move from Edmonton to Toronto, the shy songwriter penned a series of odes to his former home, celebrating the country’s wild rose, the purple skies and the “deathbridge in Lethbridge”.