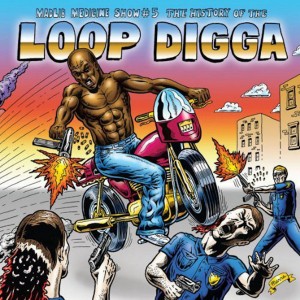 Back in the 1990s, 'beat tapes', as hip hop producers' demo-reels are now quaintly referred to, were literally that: cassettes of beats made either for self, friends, or potential collaborators. Madlib cranked out a bunch of ‘em in the days between his early productions for the Alkaholiks around 1992, and the release of his Quasimoto album in 2000, after which he took a couple of years off the beats to focus on his fictional jazz outfit Yesterday's New Quintet. This collection showcases the way that Madlib’s early hip hop demos were filtered out to his friends and associates and provides an opportunity for a unique view into his working process. These beats, often freestyled on whatever machine he had at the ready, were picked up by rappers over a period of many years, including tracks later used by the likes of Wildchild and Percee P yet created some years before release. This collection is also punctuated with a series of early solo raps by Madlib and his Quasimoto alter ego, and features the crew known collectively as CDP : rappers who worked side by side with Madlib during the early days of his Oxnard-based Crate Diggas Palace studios.

Matt says: We don't usually give a genre pick of the week to a reissue. We like to keep things fresh. But such was the impact of this incredibly creative masterpiece by Madlib, and in leu of anything that could by considered serious competition; it's time to reload on this classic leftfield beat tape. The inspiration for many; and on permanent rotation here at Picc HQ since its release in 2010.