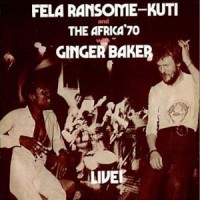 It's hard to go wrong with Fela Kuti's work from the 1970s, and "LIVE!", which features the Afro-beat innovator backed by his powerhouse band Africa '70 and ex-Cream drummer Ginger Baker, is no exception. Like all of Fela's recordings from the era, "LIVE!" consists of just a few tracks, each of which approximates or exceeds the ten minute mark.

Yet the arrangements are so dynamic on these tracks, the criss-crossing polyrhythms so absorbing, and Fela's incantatory vocals so entrancing that the long running times never seem a factor. Every cut crackles from beginning to end with its mixture of funk, jazz, and traditional Nigerian music, underscoring once again Fela's revolutionary, indelible contribution to world music. Fans of Ginger Baker will want to take note that the drummer is not showcased except on a bonus track, which pairs the drummer with Fela percussionist Tony Allen for a smokin' sixteen-plus minute drum solo.