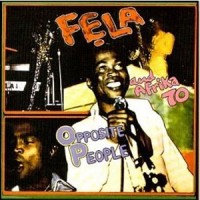 The two albums included on "Opposite People" / "Sorrow Tears And Blood" book-ended the Nigerian army's deadly raid of the Kalakuta Republic, Fela Kuti's self-appointed independent state domicile, and Kuti's hostile feelings toward upper-class Nigeria are prominent on both sessions. "Opposite People", recorded between 1976 and 1977, is brave and brassy, beaming with an almost joyful defiance on the title track. This album isn't particularly outspoken, focusing on the celebration of freethinking. "Sorrow Tears And Blood", the first recording released after the Kalakuta's capture, is fiercer; the band's sound almost seeming to drip blood. Slower and more persistent, the ominous grooves here no longer bother with metaphor, crying out bluntly, 'some people lost some bread, someone just died...them leave sorrow, tears, and blood'. "Sorrow Tears and Blood" boils over with Fela's singing and the frantic call-response of horns and chorus; the scattering sounds of people fleeing a police-and-army attack. And "Colonial Mentality" calls for a united Africa to stand up against its widespread leftovers of imperialism. The entire collection is chock-full of Kuti's distinctive polyrhythmic orchestra-funk in top form.