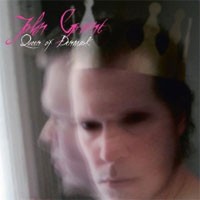 Everyone has a favorite band or singer they reckon is subject to criminal neglect. That John Grant’s effortlessly rich, expansive baritone, couched in typically heartbreaking, lush melody, hasn’t found a wider audience many would consider a crime. But no longer. Because Grant’s first solo album is so undeniably great that the world will surely listen.

It’s a record of gravitas and grace, of FM melody magic laced with raw emotional bleeding. It asks why relationships are roulette and love is hell in a last-ditch attempt at self-improvement and atonement after years of alcohol and cocaine dependency. And on top, to further the album’s brilliance, Grant’s backing band on the album are Bella Union label-mates Midlake, contributing their most empathic ‘70s-style soft-rock know-how. Put simply, “Queen Of Denmark” is the record Grant’s been waiting his whole life to make.
Not that the Czars didn’t hit their own heights. After emerging from Denver, Colorado, rave reviews were the norm… “Long distinguished by John Grant’s superlative baritone, ‘Goodbye’ reeks of wistful, melancholic class… as meticulous and complete-sounding as the best works by Mercury Rev or The Flaming Lips” said Uncut about The Czars’ final album.
“Queen Of Denmark” was recorded in Denton in late 2008 through 2009 in the studio downtime while Midlake were recording their own record. The album moves through simple piano settings via an infusion of period-perfect synths that epitomise the lonely mood. There’s flute from Midlake frontman Tim Smith on the dreamiest cut ‘Marz’ and velvet strings on ‘Dreams’, which imagines Scott Walker influenced by Patsy Cline. There is pure longing in the opening ‘TC And Honeybear’ and bitterly sarcastic anger in the magnificent title track finale… Pain, hope, fear, regret and self-discovery… “Queen of Denmark” has it all… framed within some of the finest songs you’ll hear in this or any other year…