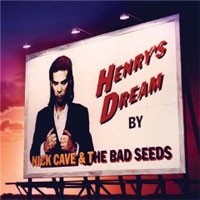 ‘Henry’s Dream’, the seventh album by Nick Cave & The Bad Seeds, was released in April 1992. It remains a big favourite amongst Bad Seeds fans and is notable for Neil Young producer David Briggs’ ‘live-in-the-studio’ method. Cave and Mick Harvey re-mixed the album and it has a vague concept, with song narratives overlapping and / or sharing characters.

‘When I First Came To Town’ is based partly on Karen Dalton’s recording of the traditional song ‘Katy Cruel’.

Cave later claimed the songs were heavily influenced by street beggars he saw in Brazil. “They’d get their acoustic guitars with one or two strings and bang away and make a racket that had no sense whatsoever. It was very violent and seemed to come straight out of the heart. Very unmusical.”

Papa Won’t Leave You, Henry
I Had A Dream, Joe
Straight To You
Brother, My Cup Is Empty
Christina The Astonishing
When I First Came To Town
John Finn’s Wife
Loom Of The Land
Jack The Ripper