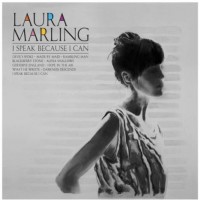 Laura Marling’s 2008 debut album "Alas, I Cannot Swim" proved to be one of the most endearing critical successes of recent years and earned the young singer-songwriter a Mercury Music Prize nomination, and more importantly being one of our top five albums of the year. Now Marling is back with her second album, "I Speak Because I Can". Crafted with producer Ethan Johns (Kings of Leon, Ryan Adams, Paolo Nutini, Rufus Wainwright), "I Speak Because I Can" sets quintessentially English lyrical themes and stories to a backdrop of music that recalls prime Americana and the Laurel Canyon scene. Backed by sublime performances by musicians including Mumford & Sons, the album represents a coming-of-age for Laura; her unique identity - thoroughly English, unapologetically female, and a fully-fledged musician – now freshly defined.

Laura MarlingI Speak Because I Can (Deluxe 2CD/DVD Edition)