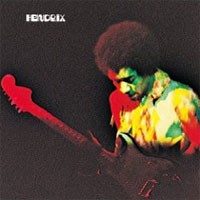 Following the breakup of the Experience, Hendrix took a sabbatical in Woodstock, New York, hooked up with bassist Billy Cox, his old Air Force running mate, and began jamming witha wide variety of musicians, including R&B drummer Buddy Miles. Hendrix had become self-conscious about his image as a showman and rocker, and about the limitations of thrashing through the same repertoire night after night. "Band Of Gypsys" was an attempt by Hendrix to redefine himself, and in a way heralded his return to the ethos of the blues and R&B, a return assisted by a powerhouse, groove-oriented rhythm section.
During their brief tenure as a band, Band Of Gypsys performed New Year's Eve at the Fillmore East, and this live recording captures some of Hendrix's most monumental solos, particularly his long, intensely emotional improvisation on "Machine Gun" (including the screeches of bombs and gunfire) and his pithy blues work on "Who Knows". Buddy Miles's "Changes" illustrates Hendrix's mastery of funk, while "Message To Love" and "Power To Love" demonstrate his remarkable ability to provide a simultaneous rhythm accompaniment and melodic counterpoint to his vocals, in the blues tradition of Robert Johnson. "Band Of Gypsys" was markedly different from Hendrix's work with Experience, but rivals it in terms of scope, vision, and beauty.