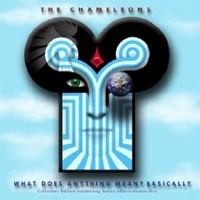 A collectors edition of The Chameleons second studio album, "What Does Anything Mean? Basically" is via Blue Apple Music. The 2-disc set contains a re-mastered version of the original album (including the 1981 "In Shreds"/"Nostalgia" single), plus a bonus disc featuring previously unreleased demo recordings. The album is presented in a Super Jewel Case with new artwork by Reg Smithies.

"'What Does Anything Mean? Basically' proved to be that rarity of sophomore albums, something that at once made the band all the more unique in its sound while avoiding a repetition of earlier work. Ironically, the first track, "Silence, Sea and Sky," turned out to be the least Chameleons-like track ever, being only a two-minute synth intro piece played by Mark Burgess and Dave Fielding. But with the gentle intro to the absolutely wonderful "Perfumed Garden," lyrically one of Burgess' best nostalgic pieces, it rapidly becomes clear exactly which band is doing this. The empathetic fire that infused Burgess' words for songs like "Singing Rule Britannia (While the Walls Close In)," a poetic attack on the Thatcher government, finds itself matched as always by brilliant playing all around. John Lever's command of the drums continues to impress, and Fielding and Reg Smithies remain guitarists par excellence; the searing, sky-bound solo on "Return of the Roughnecks" alone is a treasure. The sublime combination of the rushing "Looking Inwardly" and the soaring, blasting rip "One Flesh," leading into a relaxed instrumental coda, anchors the second side, while "P.S. Goodbye" provides a lovely, melancholic conclusion to an astounding record." - All Music

Martin says: If ever there was a perfect example of the right sound at the wrong time on an even wronger label, The Chameleons were it. Sentimental kitchen sink tales of ordinary Manchester wasted lives; of drugs, love and stoned existential evenings set against a glorious, dreamy post punk soundtrack to a winter's day.

1. Silence Sea And Sky
2. Perfume Garden
3. Intrigue In Tangiers
4. Return Of The Roughnecks
5. Singing Rule Britannia (While The Walls Close In)
6. On The Beach
7. Looking Inwardly
8. One Flesh
9. Home Is Where The Heart Is
10. PS Goodbye
11. In Shreds
12. Nostalgia

Bonus Disc (Original Album Demos)
1. Intrigue In Tangiers
2. Return Of The Roughnecks
3. Singing Rule Britannia (While The Walls Close In)
4. Perfume Garden
5. On The Beach
6. One Flesh
7. Home Is Where The Heart Is
8. Looking Inwardly
9. PS Goodbye

The ChameleonsScript Of The Bridge - 2CD 25th Anniversary Edition

The ChameleonsLive At The Gallery Manchester