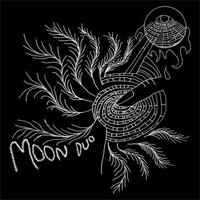 "Escape", their debut long-player on Woodsist, marks the fullest realization yet of the young group’s evolving sound. 'Moon Duo are the combined forces of Wooden Shjips’ Ripley Johnson and Sanae Yamada, and following a couple of singles this year, they’re releasing a debut full-length on Woodsist in 2010. "Stumbling 22nd St.", a gauzy, lo-fi rock number built on a repetitive riff, goes on for nearly seven minutes and presents a pretty epic introduction to this band'.  - Pitchfork.

Moon DuoLove On The Sea