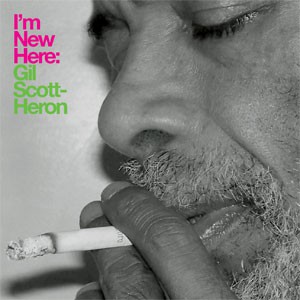 THE PICCADILLY RECORDS ALBUM OF THE YEAR 2011

'I’m New Here' sees proto-rap pioneer Gil Scott-Heron still looking forward, still challenging conventions and expectations, with his first album in 13 years. Without doubt one of the most important voices in 20th century music, Gil Scott-Heron’s unfailingly sharp and ironic eye spared neither Black Power phonies or scheming presidents. In 1971 he laid out the blueprint for the whole rap genre with his slinky anthem "The Revolution Will Not Be Televised" while, throughout a career spanning five decades, his deep, soulful voice spoke of nukes, Reaganomics or apartheid, always from deep inside the tradition. "I’m New Here" sees Gil Scott-Heron sounding as vital as ever; a record that reveals something unexpected at every turn; one that sees Scott-Heron pushing, probing and testing the boundaries just as he always has. Alongside his "I’m New Here" collaborator – producer and XL Recordings head Richard Russell – Scott-Heron has made an album that eschews the cosy arrangements and retrospective leanings one might expect from an artist over forty years into their career.

Laura says: A truly remarkable album, and an almost permanent fixture on my turntable this year. Gil's storytelling is second to none; from the melancholy of opening track, "On Coming From A Broken" home, to the raw blues-stomp of "Me And The Devil" to the dark brooding "Where Did The Night Go" he paints vivid pictures of his world. He even takes a Bill Callahan (Smog) song and makes it his own. (It's so good in fact that it gives the album its name!) Sad, witty, melancholic, uplifting and thought provoking - this is Gil on top form.

Gil Scott-HeronThe Revolution Will Not Be Televised