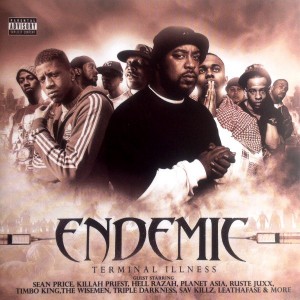 Heavy hitting hip-hop here from Endemic, a Nottingham-bred producer now living in Brooklyn. Originally released in 2009 on CD only, "Terminal Illness" contains a vertible roster of US rappers - including Wu-Tang affiliate Killah Priest - plus a sterling turnout of UK talent.. The style is kinda a mix between Dilla influenced rap with some volatile verses and smokey loops. There's a heavy helping of boom-bap but there's also that kinda fiery, UK indie spirit running through it all. Rough around the edges yet delivered with a kinda creative perfection that wastes nothing across its 2-sides of wax.

I'm really surprised this hasn't causes more of a stir to be honest. Maybe it's cos it only got released on CD on an indie label, overshadowed by the majors with bigger marketing budgets. Whatever the reason, it's certainly a pleasure to hear this energized dosier of street fables and ruff beats pressed on wax for the first time. Highly recommended!