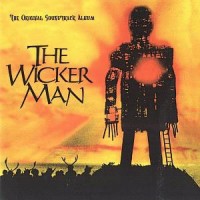 For this 2010 release ALL the songs from the cult classic 1973 soundtrack are included. Many years this was a holy grail among soundtrack aficionados, this release has been prepared from recently discovered master tapes with a clarity and presence that gives the late Paul Giovanni's haunting music the showcase it has so long deserved. This is definitely the stuff that myths are made of! Containing exclusive material from the later, longer version of the film, including the song "Gently Johnny", which was not available on early LP issues.

Paul Giovanni, together with Magnet, has created a mysterious and sinister world that has a life of it's own nearly 30 years after the film's release - flutes, lyres, harmonicas, and guitars, mixed in with original and traditional folk material makes each song totally different, summing up the atmosphere of the movie brilliantly! The Wicker Man is a stunning soundtrack which all you movie buffs and traditional British folk music fans are advised to snap up for your collection!

With its 40th Anniversary just about to happen, and the film version about to go in cinemas once more, Music On Vinyl have decided to repress The Wicker Man LP edition again. This is a straight repress of 500 copies on black vinyl.

For this 2013 release ALL the songs from the film are included. Containing exclusive material from the later, longer version of the film, and including the song "Gently Johnny". This release has been prepared from the original stereo master tapes. Packaged in a lavish gatefold sleeve with extensive notes and stills from the movie.

Side B
1. Procession
2. Chop Chop
3. Lullaby
4. Festival / Mirie It Is / Sumer Is A Cumen In
5. Opening Music / Loving Couples / The Ruined Church
6. The Masks / The Hobby Horse
7. Searching For Rowan
8. Appointment With The Wicker Man
9. Sunset