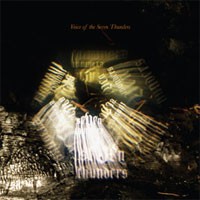 Named following the rare find of an 1870's tome full of lectures on the Apocalypse, Voice Of The Seven Thunders is the new project from Rick Tomlinson - the distillation of years of divergent musical exploration that have followed his much-acclaimed Voice Of The Seven Woods debut (Twisted Nerve, 2007). Taking leave of his previous incarnation, this new project is a notable departure; with infernal and primitive energies mingling with the bucolic reveries that won him previous acclaim: this time round, multi-instrumentalist and sound sculptor Tomlinson introduces us to his fully-fledged rock group.

"Open Lighted Doorway" begins the album with a glimmer of what went before, the pastoral shades of Tomlinson's earlier recordings appearing soaked in reverb as if corrupted by time. Giving way to the monolithic "Kommune" its rhythmic percussive layers of huge primal weight and beat, and a build up of rolling guitars. "Out Of The Smoke" follows with its acerbic electric and acoustic contrasts, "The Burning Mountain" like flames erupting from an Anatolian mirage, a tide from the East; its fury subsides only for the exceptional, purely acoustic, respite offering "Dry Leaves", before "Dalälven" breaks the spell with its vertiginous howl. "Cylinders" swells from dark kosmische drones into warm opiate depths, only for "Set Fire To The Forest" to erupt like a nefarious dervish, a blinding acid haze that is quenched by final track, stripped down vocal harmony - the nostalgic, introspective "Disappearances".

Already drawing comparison with bands from the heyday of 70s acid rock and the likes of Amon Düül II, Peter Green's Fleetwood Mac, Japan's Flower Travellin' Band, the early years of Pink Floyd and the Velvet Underground's drone jams, as well as the electronic kosmische of Cluster and the unhinged organic grooves of International Harvester. The album was recorded in just three days in the spring of 2009 - featuring long-standing collaborator Chris Walmsley on drums and Rory Gibson on bass, without prior rehearsal, in Andy Ramsey's Stereolab studio with engineer Jimmy Robertson.

Voice Of The Seven WoodsThe Journey