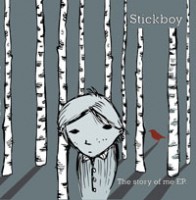 After the success of his first album proper "Under The Sleepy Moon" which resulted in national radio play (Radio 2, XFM, 6Music), a live session with Marc Riley on BBC 6 music, a single release of "Pirouette" and the song "Better As Two" being picked up for the end credits of a film coming out later this year, Stickboy also spent most of 2009 writing, reading and moving house. The result of all of this has led us to this new EP, named after its first track "The Story Of Me", its a little insight into where he is up to and sets the path for the next album which he will be busy writing this year.

All tracks were written , played and recorded by Stickboy at home.

Stumble Through The Park (Hidden Track)