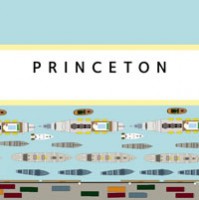 Princeton release their UK debut "Calypso Gold" on Jodie & Victor records. growing up on Princeton Street in Santa Monica, twin brothers Jesse and Matt Kivel and childhood friend Ben Usen started playing together as a group in the late 90s, but officially formed Princeton during a year long stay in London. The band now lives in the Eagle Rock district of LA where their album was recorded. Fittingly for such a broad range of lyrical touchstones, the band's musical influences stretch just as wide, taking in everything from "Something Else" era; Kinks to Serge Gainsbourg, New Order, Arthur Russell, Scott Walker, Yo La Tengo and Gilberto Gil. "Calypso Gold" features lush strings and infectious, syncopated percussion for an effect that's wistful and even a little danceable.