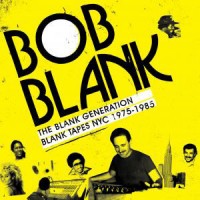 Strut's first collaboration with Bill Brewster and Frank Broughton’s DJ History celebrates Bob Blank’s time at Blank Tapes with an exclusive compilation, covering the many facets of the producer's work. They feature the very first track ever recorded at the studio, Milton Hamilton’s "Crystalized", anthems including Fonda Rae’s "Over Like A Fat Rat" and lesser known Blank classics from the vaults from Debby Blackwell and Mikki. The first ever album retrospective of one of New York’s most revered of all producers, Bob Blank, this album traces the history of his independent studio, Blank Tapes, one of the city’s most important creative dens during the vibrant arts scene of the mid-70s to mid-80s.

Blank started out in New York in 1973 as a guitarist before producing one of the first 12" disco records in 1975 – Jimmy Sabater’s "To Be With You". He opened his own Blank Tape studios a year later. He quickly became an essential port of call for New York’s diverse artistic community, honing the freeform, anarchic visions of August Darnell, Cristina and Lydia Lunch for ZE Records and, with producers Patrick Adams and Greg Carmichael, helping to shape the sound of many disco classics. Musique, Inner Life, Instant Funk and Salsoul Orchestra all recorded classics at Blank Tapes. Arthur Russell also recorded much of his most celebrated disco-related output at the studios under pseudonyms Dinosaur L, Indian Ocean and Felix, as well as "Wax The Van" with Blank’s wife, Lola. Other regulars at Blank Tapes included Latin producer Tito Rodriguez, whose Charanga 76 and Eddie Palmieri recordings with Blank would receive Grammy nominations. Not only that, but jazz and blues heads like Sun Ra and James Blood Ulmer also passed through the Blank Tape mixing desk. An awesome compilation, and another essential from Strut.