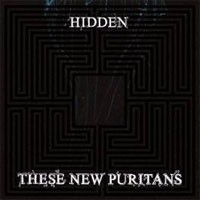 "Hidden" is the highly anticipated comeback from a band whose debut "Beat Pyramid" earned them huge critical acclaim. It's an epic return, featuring six foot Japanese taiko drums, a thirteen piece brass and woodwind ensemble and Foley sound effect recording techniques.
Produced by These New Puritan’s Jack Barnett along with Graham Sutton, and mixed by Dave Cooley (J Dilla, MF Doom) the single is strange as it is confrontational. It draws equally on the rhythmic lexicons of dancehall, 20th century post-minimalism, and the plastic textures of modern US Pop.
The album’s heavy layers of rhythm combined with the classical minimalist instrumentation will challenge, perplex and mesmerise the listener and more than reward any attention lavished upon it. Sometimes brutal, sometimes melancholy, and sounds like nothing else.

Laura says: Heavy percussive rhythms provide the backbone here, embellished with choral chants, brass, woodwind – in fact just about everything but the usual indie-band staple - guitars. (Well, if they're in there, they're pushed way back!) It's an intriguing album, kicking off with a solemn brass-led intro it then plunges into the 7 minute epic of the single "We Want War", which is an amazing amalgamation of heavy Steve Reich-esque percussion, Eastern rhythms, half whispered vocals, blasts of brass and even a choir. The stand out track for me is the dark, claustrophobic "Three Thousand" that reminds me a little of Massive Attack.
The rest of the album follows a similar path to these three opening tracks at times brutal and percussive, at others heavy and oppressive, and at others almost soundtracky with the brass and woodwind reminiscent of Prokofiev’s eerie masterpiece “Peter And The Wolf”.
It’s quite proggy and maybe a bit overindulgent at times, but it’s a unique and amazingly ambitious follow up to "Beat Pyramid" that’s well worth your time.