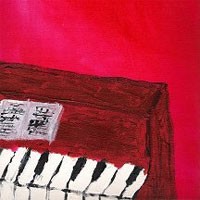 Manchester-based six-piece Table are led by songwriter David O'Dowda, who combs together different strands of modern folk music to create something new and wonderful on this, their first seven-inch titled "Songs You Can Sing". The two tracks on this single are sumptuous delights, airy and ornate while being oddly familiar. Marshalled by David, Table waltz through quietly elegant folk-pop with minimal guitar, stately piano and low-key vocals on what sounds like an endearingly sweet single, despite the deceptively barbed tale woven throughout. If "Songs You Can Sing" is beguilingly understated, then "Most" is multi-layered and bursting with ideas where electronic and organic sounds collide. It's a many hued delight which pulls together disparate elements and twists them into a myriad shapes, blurring excitedly before sweeping to a beautiful climax. Music that reaches into you and pulls out your soul, personal and frankly as dangerous as it is fragile. Imagine East River Pipe covering a Richard Hawley penned lullaby and you'll have a good idea of what to expect.

Laura says: I can't really think what to say about this, other than I really like it! Two slices of cleverly constructed folkiness which despite the addition of electronics, maintains a real warmth and charm. Lovely stuff!