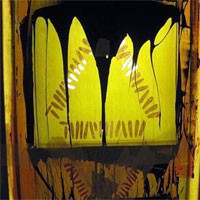 This is their debut mini-album originally released on Manimal Records, now reissued in the UK on Rough Trade.

Los Angeles' mystical Warpaint weave majestic, haiku-like guitars, hypnotic vocals, and driving post-punk rhythms into gorgeous, sprawling songs that skirt the line between the soundscapes of psychedelia / shoegaze, the haunting intimacy of folk, and rock's primal heaviness. At the core of the band are childhood friends Emily Kokal and Theresa Wayman who both met bassist Jenny Lee Lindberg at a commercial casting audition in LA. The trio quickly traded in their headshots for guitars and the fertile, diverse LA music scene has been much better for it since. Expertly mixed by John Frusciante, the album successfully captures the band's sonic textures and playful dynamism Warpaint is notorious for creating live. Onstage, Warpaint's disarmingly authentic package can shake a room into a dance frenzy—while simultaneously holding it in a trance-like dreamworld.