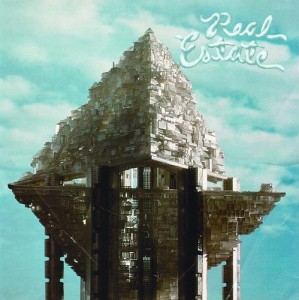 Real Estate waft in on vibes of hazy summers past. The New Jersey quartet of Martin Courtney IV, Matthew Mondanile III, Etienne Pierre Duguay and Alex Bleeker cut the sleeves short and the pop smooth to shade you from the midday heat. Every song works its way to that part of your consciousness that revelled in the fleeting waves of freedom that eked in once classes broke and the sun lingered a little longer over suburban roofs. And with three quarters of the band holding down Garden State roots its no surprise that a bit of Jersey indie-pop heritage sneaks its way into their sound, lifting the most sun streaked moments from The Feelies and Yo La Tengo and filtering them through the kaleidoscope of memories aimless drives through parched neighbourhood streets. Martin Courtney's songwriting has a way of wrapping up the immediacy of youth with the ennui of age for the perfect shade of bittersweet bliss, mind you though, much heavier on the sweet than the bitter. Add to this Mondanile's (Ducktails/ Predator Vision) shimmering guitar strains full of equal parts sea foam and beer foam, pepper in the boardwalk clatter of Duguay's drums Bleeker's staccato low end and the perfect afternoon is just a lawn chair and boom box away.

Laura says: This would've been in by Top 20 Albums Of The Year if it had arrived in time. It missed out by a week!

Yo La TengoAnd Then Nothing Turned Itself Inside-out