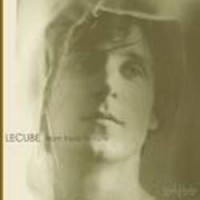 Julien Lecube' Barbagallo was born to Sicilian immigrant parents in the pastoral landscape of Tarn in France's South-West, where he still lives. His first EP "My Bungalow" marked the beginning of his solo project, Lecube and lent him mythical status via the only French magazine which got hold of it, Magic (French equivalent of Mojo). With a simple 8-track machine and a few intimate songs, he began telling the stories he held close to his chest, a fragile combination of glances and breathes, collected randomly on local buses and unmade beds. In the spring of 2004 he began to record new material, on his friend Benjamin's staircase, a collection of songs which were to become "From Here To Now", stories where women he'd love to love meet men he'd love to be, and vice versa. These recordings remained on the stairs until Julien played a local party where he met Stephane Bismuth, Megaphone Music (The Strands, Angil, Karen Dalton), who convinced him to release his new songs initially as a series of 7". Those tracks drew comparisons to amongst others, The Monochrome Set, Neutral Milk Hotel, Bob Dylan, Syd Barrett, The Byrds, Elliott Smith and Howe Gelb.