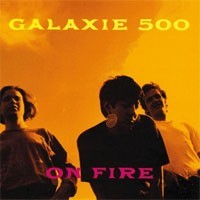 "On Fire" is widely recognized as the canonic pinnacle of Galaxie 500's career. The artwork conveys this, with a low-angle shot of the band, looking up towards an amber sky. This record marked the realization of their signature sound. Nowhere is it clearer than on the album opener, "Blue Thunder", the closest a song can come to waves crashing on a beach in songform. Lyrically inconsequential, with a chorus composed entirely of 'la's', the track's power lies in a systematic build and break of intensity that reaches a spector-like climax. It is the quintessential Galaxie 500 song, encapsulating all that was great about the band. With the Boston trio once again utilizing the bizarre genius of producer Mark Kramer, "On Fire" sounds like anything but. The guitars are warm blankets enwrapping Dean Wareham's vocals, percolated by the open percussion of Damon Krukowski and anchored by the emotion-laden bass of Naomi Yang. Songs like "Snowstorm", "Strange", and "Decomposing Trees" have an endless quality, without beginnings or ends, but rather frozen somewhere on a spectrum of melancholy. For the first time since its original pressing, "On Fire" is available again on vinyl. Cut by vinyl ace Kevin Gray from a remaster by Kramer and Alan Douches, the album sounds more vibrant than ever, and Galaxie 500 exists again as one of the most enrapturing and glorious bands to emerge from the underground in the past 25 years.

Galaxie 500This Is Our Music