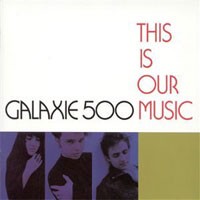 After producing two albums celebrated by a thirsty underground network of fans, Galaxie 500 released what turned out to be their unexpected swansong, "This Is Our Music". The title is an intentionally declarative statement. After being labeled masters of the disengaged and forlorn, Damon Krukowsi, Dean Wareham, and Naomi Yang delivered a full-length comprised of their most stately material. Here, one can hear potential realized, as well as changes afoot. "Fourth Of July" is a surprisingly up-front song for the band, with rolling drums and a bass-heavy refrain, and it proved to be their most popular single. The track sets the stage for the dynamism of "This Is Our Music". When Galaxie 500 sounds wistful ("Summertime"), it sounds like years of yearning actualized; when the band sounds regretful ("Sorry"), it comes pleading on its knees. The trio found a beautiful balance between increased production values and knob-twiddler Mark Kramer's odd handed approach. For the first time since its original pressing, "This Is Our Music" is available again on vinyl. Cut by vinyl ace Kevin Gray from a remaster by Kramer and Alan Douches, the album sounds more vibrant than ever, and Galaxie 500 exists again as one of the most enrapturing and glorious bands to emerge from the underground in the past 25 years.