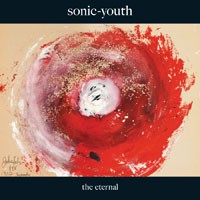 "The Eternal" is a supercharged rocker, recalling aspects of the "Evol", "Sister" and "Daydream Nation" holy trinity but with cleaner, louder production and more straightforward momentum. With Pavement's Mark Ibold joining on bass, and producer John Agnello back at the controls, "The Eternal" takes the melodic songwriting of 2006's "Rather Ripped" and slams down the accelerator pedal. Produced by John Agnello and the band, "The Eternal" not only marks Sonic Youth's return to the independent label sphere (titles on their own SYR label excepted) after a long association with Geffen, but more importantly, ranks as one of their more inspired efforts in a 28 year career. Of "The Eternal", Matador's Gerard Cosloy says, 'We've not had a record in our recent history that's been the subject of nearly as much speculation and anticipation. Suffice to say we're pretty amazed at the way the band delivered something this neoteric while still sounding like, well, themselves. Less of a reinvention and perhaps more to do with a particularly awesome dozen songs.'

Here is Thurston Moore's take on the songs:
Sacred Trickster (2:10)
Out-of-the gate hardcore matinee track with Kim singing salutes to French painter Yves Klein and Western Massachusetts noise artist Noise Nomads.
Anti-Orgasm (6:08)
Inspired by the story of Berlin 60s model/activist Uschi Obermeier and the gang at Kommune 1. Free love, dominance and submission, and other political states-of-confusion.
Leaky Lifeboat (For Gregory Corso) (3:32)
The NYC beat poet Gregory Corso once referred life on Earth as a leaky lifeboat. This tune expounds on this rumination.
Antenna (6:13)
Melodious ode to fleeting fantasy and unresolved desire with the sound of two analogue radios communicating the emotional action.
What We Know (3:54)
Charging forth with a riff in reference to Sonics Rendezvous Band, Lee sings a triptych to identity and unity.
Calming The Snake (3:35)
One of the first tracks written, musical references to the Dead C, the MC5 and Neu. Kim musing on visions of Death in painting.
Poison Arrow (3:43)
Dedicated to the lust groove of Kevin Ayers where thoughts of love as pretty poison rejoice in surrealist deliverance.
Malibu Gas Station (5:39)
An ode to the flash moment of the camera as you knowingly step from your SUV sans panties.
Thunderclap For Bobby Pyn (2:38)
Flashing back to a wishful existence in the original Masque basement on N. Cherokee in Hollywood, crashing through lawns and garbage cans en route to the Canterbury/Disgraceland to jump up and down on beds with Helen Killer, Mary Rat and Trudi.
No Way (3:52)
First song written for the album, with a nod to The Wipers of Portland, Oregon. A confrontation with the devil in his guise of temptation and staking a distinct place amongst the black legions.
Walkin Blue (5:20)
Lee with his arm around yr shoulder, getting you through a seemingly impenetrable day of dread to a clear vision towards sweet foreverness.
Massage The History (9:41)
The long way home, where blood rules the universe and time becomes myth.

Sonic YouthDirty - Back To Black Edition