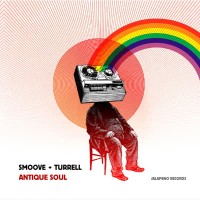 A raw and rich story-telling vein was captured when Smoove & Turrell released their debut album, 'Antique Soul' in 2009. It laid the seed for what has become a unique musical direction, forged by a band who boosts a loyal fanbase worldwide to this day. It's a rarity when an album delivers eleven songs that grow on the listener with every play. After much demand for a repress, this sought-after LP comes in the form of a Limited Red and Black Splatter Vinyl.