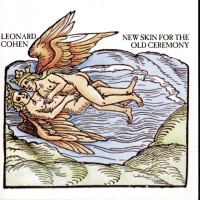 1974's "New Skin For The Old Ceremony" saw Cohen taking a turn away from the spare sound of his earlier releases, with such numbers as "Chelsea Hotel #2", "There Is A War" and "A Singer Must Die" featuring expanded instrumental arrangements and some of the most expressive vocal performances of Cohen's career.

Leonard CohenThanks For The Dance