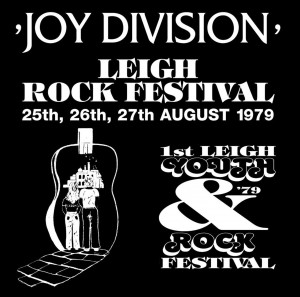 Joy Division live at the Leigh Rock Festival in 1979.

The Leigh Rock and Music Festival was a 3-day mini-festival co-hosted by Zoo Records and Factory Records, held in Leigh on 25, 26 & 27 August 1979. Factory gave the event the catalogue number Fac 15 and the title 'Zoo Meets Factory Half-way'. The roster included A Certain Ratio, Joy Division, Crawling Chaos, The Teardrop Explodes, OMD, and Echo and the Bunnymen.