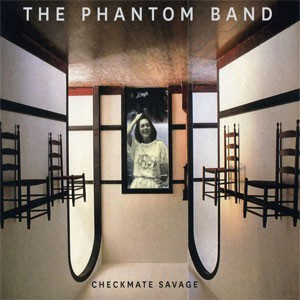 THE PICCADILLY RECORDS ALBUM OF THE YEAR 2009

After years of changing their identity with every gig that they performed, this remarkable Glasgow based six piece finally settled on the name of The Phantom Band in 2006. Their debut album “Checkmate Savage” was born, under the expert guidance of producer Paul Savage from the Delgados, from lengthy jam sessions that highlighted not only the band’s experimental side, but also their unique grasp of melodic looseness. Riding on a near perfect motorik beat, the songs sway and swoon with a knowing art-rock style, underpinned throughout with an earthy, almost mystical, folky Scottish vocal delivery.

“Checkmate Savage” is otherworldly, and hard to pin down, with a freeform spaciousness that band’s only usually discover on their third or fourth albums, and in that respect The Phantom Band are most certainly way ahead of the game, one can only wonder what their next album will bring. They’ve been compared to the Beta Band, krautrock legends Neu! and Can, as well the likes of Nick Cave, Bonnie ‘Prince’ Billy, the Violent Femmes and Captain Beefheart, but The Phantom Band are truly out on their own. A quite fitting, and truly exceptional album of the year.

Laura says: Given the volume of records released these days, it's easy for things to disappear into your record collection after a few months, never to be unearthed again, but this is still one of my go-to albums, years after it's release.
The synthetic, metallic chill of the motorik rhythms and wooshing synths is balanced perfectly with heavy percussion and Rick's rich vocals adding more organic tones. It's just an amazing, inventive album that while hinting at a multitude of reference point, sounds like nothing else.