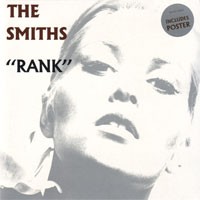 This was a live album recorded in London on "The Queen Is Dead" tour, around the time that the "Ask" single was released in the autumn of 1986. The rockier version of that song here makes amends for the jangle-lite softness of the original. Elsewhere, Elvis's "His Latest Flame" segues into "Rusholme Ruffians" and "What She Said" spills into the outro of "Rubber Ring". Oddities aside, this album captures The Smiths during the 6 months when Craig Gannon was in the band as an extra guitarist. This allowed Johnny Marr to rock out and relax: something you wouldn't really associate The Smiths with. But here's the proof. Live, they were an explosion, a raucous celebration, and certainly (whisper it: FUN!) There was very little time for navel-gazing at a Smiths gig. This album captures that. With some aplomb. Rock on!